The 2022 Skillaroos and Team Australia were officially announced at a morning tea with the Governor General of Australia at Government House in Canberra on 15 July 2022.

With the cancellation of WorldSkills International in Shanghai, BASF and AMA Group continue to support Skillaroo, Isabella Turrise, in receiving the best training available to deliver her an experience she will never forget.

Isabella earned her place to represent Australia after finishing first in the Worldskills Nationals in 2021. Originally from Canberra, the 23-year-old spray painter now lives in Western Sydney, where she works at AMA Group bodyshop ARM Mt Druitt. After originally studying animal science and zoology, Isabella completed her Certificate III in Automotive Refinishing TAFE NSW’s Campbelltown campus before entering the WorldSkills Regional competition in 2019 where her talents were quickly noticed.

BASF support WorldSkills International as the exclusive sponsor of the Car Painting category. Despite their recent announcement to cancel this year’s event they will continue to support Isabella’s skill development and knowledge with her continued training at BASF’s Glasurit Refinish Competence Centre, Sydney, with national head trainer, James Green. 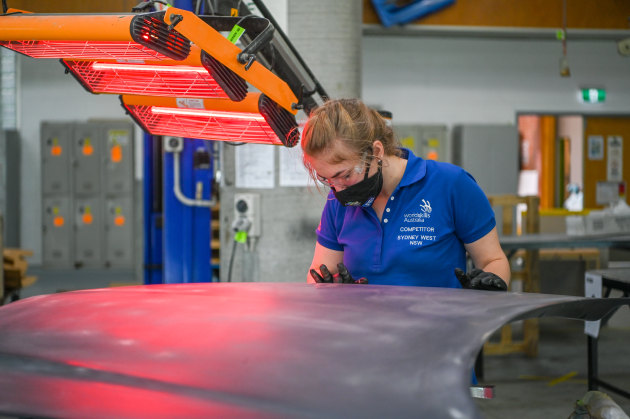 Employed within AMA Group, Isabella has the support of her current and former managers, Peter Hardy at ARM Mt Druitt and Mark McLean at KSR Autobody, plus mentoring from the Group’s general manager Capability and Engagement, Louise Anderson.

“We are all so proud of Isabella and her achievements through her apprenticeship, including her achievements at the WorldSkills National competition,” says Peter Hardy. “Isabella is very passionate about the art of spray painting, has a great eye for detail and has a huge future ahead of her.”

As well as on-the-job training and support in her workplace, flexible work hours enable Isabella to attend offsite training at TAFE NSW and at the Glasurit Refinish Competence Centre. Carl Tinsley, one of Isabella’s teachers at TAFE NSW, is also providing additional training for her. “This achievement is a ringing endorsement of the training provided by AMA Group and the opportunities that the organisation provides to young women wanting to develop a trade career,” says Carl. Isabella completed her apprenticeship in May 2022 and is now a trade-qualified spray-painter.

Presenting the automotive repair business as a desirable career path for the next generation is a common goal of both BASF and AMA Group. BASF’s commitment to providing state-of-the-art­­ training at the Glasurit Refinish Competence Centre, is complimented by their progressive digital cloud-based software Glasurit Refinity.

“The industry requires young, well-trained talent and BASF is proud to be a part of delivering high level training to the industry and to Isabella to help her reach her career goals within the automotive repair industry. We are excited to see her success into the future” said Kishen Khosa, Head of Coatings, BASF Australia.

AMA Group is committed to training more than its share of the next generation of leaders and skilled tradespeople in the collision repair industry, through its industry-leading apprentice program. The group has more than 315 apprentices across Australia and New Zealand and aims to take on another 300 within the next year. Attracting the best people and training future industry leaders is critical to maintaining high quality workmanship and will guarantee a strong pipeline of experience for decades to come.

With Isabella’s commitment to self-development with BASF, and building a promising career within AMA Group, her path to success is already being acknowledged within the industry: She was recently awarded one of the two awards in the Technician/Estimator category at the Women in Collision awards in February 2022, and was recognized at the TAFE NSW 2022 Excellence Awards, winning Student of the Year, Apprentice of the Year, and Supply Chain & E-Commerce Student of the Year.

Isabella is a true representation of the next generation of spray painters and has the support of BASF and AMA Group behind her.